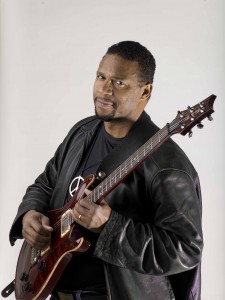 Originally from the Dominican Republic (DR), studied solfeggio privately in 1985 and Classical Guitar at the Conservatorio Nacional de  Santo Domingo (CNSD) in 1986 and taught himself electric bass and Jazz-Rock guitar. In Boston took private lessons with Jay Weik, Tony Wolf, Steve Neil, Ed Meradith as well as with the world famous, nowextinct Charlie Banacus. In 1997 attended the John Payne Music Center (JPMC) in Brookline, currently attends the Morningside Music Studio and is an alumni of  Berklee College of Music.

A multi-instrumentalist, Leo started his professional career in 1989as a guitarist for Roy Tabare’s  El Clan de La Furia and as a bassist for the Rock group Cahobazul. Joined the first Jazz Ensemble ofthe CNSD directed by sax legend Crispin Fernandez in 1991 performing  at the Conciertos de Jazz Astwoods and on national television. Toured the DR as part of La Orquesta Codetel under the direction of Amaury Sanchez. A Boston resident since 1994, has performed in multiple projects as a Jazz guitarist at Ryles, Bob’s the Chef (now Daryl’s Corner), Cambridge’s 1359 Jazz Club, Wally’s and theHistoric Connollys’ Bar. Leo is currently the Bassist and founding member of In The House (ITH), Boston’s premier function band since 1998 (inthehousene.com). With ITH has toured all over New England with some of the  area’s elite players including: Patrice Williamson, Kera Washington (zilimisik.com), Rusty Scott, T Lavitz, Steve Bourassa, Andrew Saltzman, Mike Mele and Marianne Solivan to name a few. In 2011 founded The Leo Colon Latin Jazz Project along with Santiago Hernandez.

Leo started his teaching career in 1988 and so far has taught guitar, bass, piano and ensemble to over 500 students. Currently teaches at ZUMIX since 1998 (zumix.org). In 2011 ZUMIX was chosen among 471 nominees to receive an award from the white house as one of the top 12 non-profit youth organizations in America. In 2001 while at ZUMIX Leo co-founded the Student ensemble The DiverCity Band (DB). Some of the highlights of (DB) includes opening for Kool and The Gang at Suffolk Downs and the release a mini-EP entitled The DiverCity Band available for download in Itunes. Leo was Part of the after-school teaching staff of the Mario Barnes Academy  Middle school (2005), director of the  DOREMI School of Music In Roxbury (2007), is currently organist and musical director of Christ Church/ Iglesia de San Juan since 2001 and is currently working on a guitar instruction method book.